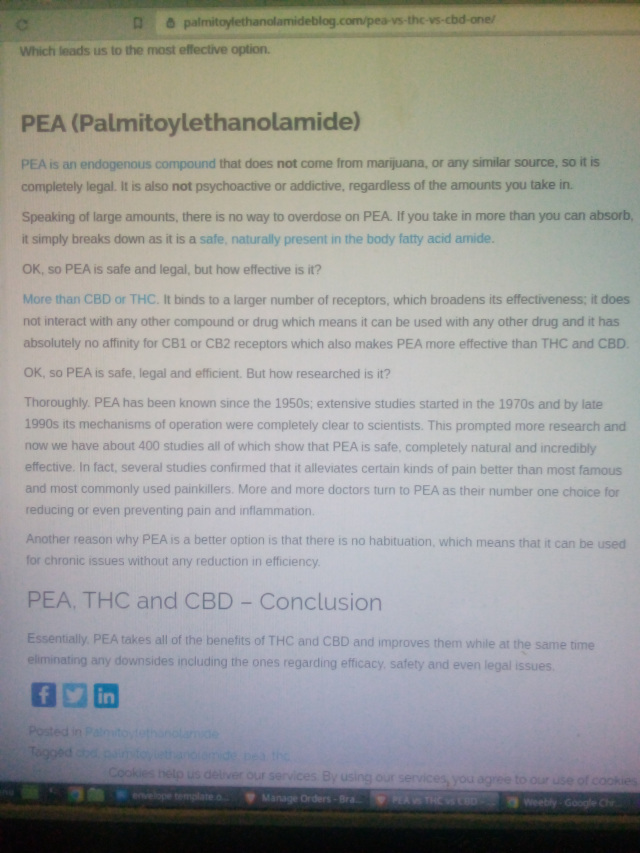 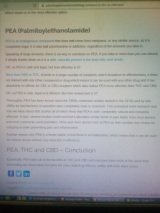 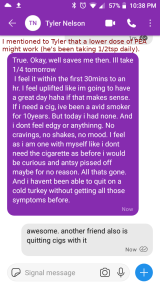 I am not providing this anymore due to limited space, but you can obtain it probably from my friend Ethan. His number on Signal Messenger is +16145796325.

Palmitoylethanolamide (PEA, not to be confused with Phenethylamine which is also abbreviated PEA) is naturally found in our bodies and our diets. It is a "fatty acid amide" which has great effects on the endocannabinoid system (and boosts anandamide, our endogenous cannabinoid). If you haven't seen the Revolution of One TEDx Talk on the endocannabinoid system, you MUST watch it now. It's 15 minutes. Although PEA isn't mentioned by name in the talk, the talk is critical to understanding the importance of PEA via the ECS. There's also another part of the ECS which is best used for sleep: oleamide.

The highest amounts can be found in soy lecithin, but you'd need to eat 1L of that to get just 1mg of PEA (so you'd need to eat 100L of soy lecithin to get a good dose of PEA!). PEA gets an unfairly low level of attention compared to the benefits it offers. There's a wealth of info on it at selfhacked. PEA has no side effects in over 400 medical studies over 60 years! -- altho the truth is of course that someone out there will get side effects from anything, PEA included -- but what they don't tell you is that it also seems to cure many addictions in 2 ways:

1) It makes you feel better psychologically and physically. Like CBD, kind of, but more natural feeling, and can be somewhat stimulating while at the same time relaxing.

2) It blocks the effects of cocaine, THC, nicotine, caffeine, (vaporized)DMT, and other drugs, altho it increases the effects of opioids (while decreasing the need for them). Not sure about alcohol and benzos yet, altho I have found that kratom can cure alcohol addiction, and PEA can keep you from using kratom for long. Kava is also excellent for alcohol and benzo addictions. If you'd like a free sample of Kava extract, let me know.

3) I recommend also using N-Acetyl-Cysteine which is another panacea and addiction cure.

PEA's benefits are enhanced with the blend I make, since its absorption is greatly increased as a result of lipophilizing it (dissolving it into hot virgin red palm oil) and further increased due to the black pepper. The ECS regulating effects are also provided by the synergistic ingredients of curcumin and copaiba oil.

You may notice a lovely peaceful, clear-headed high on your first dose, whereas with regular PEA powder it may take 1-3 weeks to begin noticing all the benefits from PEA, which include many of the same medical benefits from CBD (altho some people get relief within hours of taking PEA). According to selfhacked, PEA helps reduce seizures, pain, inflammation, infections, arthritis, histamine release, depression, improves eye health, heart health, remyelinates and protects the brain from neurotoxins (THC is a neurotoxin and creates double the risk of false memories.).

Standard dosage of PEA is 400mg (1/4 teaspoon) once daily. You don't need capsules because there's no taste or odor. If maximally dissolved in red palm oil, 400mg of the oil is about the minimal effective dose on average, but taking too much doesn't harm anything except your pocket... and larger doses may prolong the effects.

Note that the body uses PEA depending on the level of physical and emotional stress. I find PEA works for days if I am not stressed by conditions/drama. Only for hours if I am stressed by drama.

I'm selling this cheaper than you can find it on Amazon. Some people are sensitive to rutin and luteolin (luteolin is unsafe for pregnant women, children, anyone taking drugs that are metabolized by CYP450 etc), so I don't include those in the PEA powder like you would find in Mirica brand, however if you request them I do have them as well. Note that the red palm oil actually contains some luteolin naturally.

Send me your comments if you've tried this!

I have one awesome review posted in the photos section here.

Out of 4 customers addicted tocigarettes, PEA helped 3 to quit effortlessly.

Out of 2 customers with marijuana habits, 2 had no more desire for marijuana.

1 customer's aunt is currently trying it to quit alcohol--she said she felt great the first day she took it. She said it took care of most of the withdrawal symptoms. She's been off alcohol now for a week as of this writing.

1 customer's father is finding it super useful for multiple sclerosis. His report is here.

Here's a report of a customer finding PEA to help tremendously with his chronic pain (he was "at the end of his rope" according to a further communication). He also asked about tolerance possibilities, which I responded to. Here's another customer ("Meanmrgreen") who says PEA drastically reduced his nerve pain, and got his friend clean off tobacco easily, altho it didn't help with musculoskeletal (i.e. "regular") pain, and then a follow-up: pain still gone, friend still clean off tobacco a week later or so, his mom is no longer bedridden, and his friend's auto-immune disorder is getting better.

1 customer has used it to reduce his kratom dosage substantially. His report.

"The pea I ordered from you off Amazon was more effective than another popular brand I originally had tried and just add affordable. I realized in researching it for pain that out helps with my allergies a great deal too, which is great because I become susceptible to respiratory infections when they're really bad, so this stuff is a miracle if you ask me, it even improves my kid a bit and he's about a tolerance to katom. Can't wait to try the red Palm oil version! Thanks for sharing this! Please include any other samples in my order off here, I'm into it! "﻿

"This stuff is amazing for pain- i have 2 herniated disks in my lower back and i was on track to having surgery to fix when this covid bullshit all started. Needless to say, surgery was not an option, and i was simply told "you'll get better" and was basically hurried out of the neurosurgeons office, all within less than 5 minutes of arriving at the hospital. I started taking the P.E.A. and noticed a difference in pain right away, and the effects are more pronounced the longer i take it.

Starting to look like i may not need surgery after all, its really gotten that much better. And on top of that, i have reduced my cigarette intake from 1 full pack a day, in September, to less than 1 cigarette a day by December, with no effort or withdrawals at all...awesome stuff! I highly recommend for anyone suffering pain of injury or addiction."

Even more amazing than things I sell is Wim Hof breathing, which can put you to sleep, reduce stress, help you meditate, and improve mood. Here's a good TEDx talk: www.youtube.com/watch?v=R53GljF7IxU

Ok, now you are about to say I'm insane, but I believe that Palmitoylethanolamide & related compounds may have helped Buddha to become enlightened! It's a fun hypothesis, if not provable.

The story goes that he was barely eating anything for 6 years of austerities, getting nowhere fast in his meditations.

Then one day, he was meditating under the Bodhi tree (Ficus religiosa). The Bodhi tree, by the way, is filled with a host of natural medicines. The fruit of the Bodhi tree contains a flavonol called kaempferol, which is one of the strongest natural inhibitors of Fatty Acid Amide Hydrolase (FAAH). FAAH is what naturally breaks down anandamide and PEA (so by inhibiting FAAH, anandamide & PEA are boosted in the body).

Side note: There is a woman today in her 60's who is famous for having a rare genetic condition that blocks FAAH in her body completely. This woman reports feeling no pain and always being happy. Because she feels no pain, she injures herself a lot without realizing it, but her wounds heal faster than the average person also.

Anyway, back to the starving Buddha-to-be, who may have eaten one of these "religiosa fruits" which could have fallen to the ground and gone to waste had he not eaten it. This would block the destruction of PEA if he were to consume it, thus boosting its power.

At this time, a young localwoman brought him some rice pudding (with milk of course, which is [rather, was, back when cows weren't stressed in factory farms] high in PEA). He consumed that and was re-invigorated for deep meditation. In that deep meditative state, he found the "middle way" between the notion of eternalism and annihilationism.

Imagine having no PEA in your system at all due to starving yourself for years, then you get a boost: BAM! If there's one phrase to describe PEA I would say it is exactly that: The Middle Way. Perfect balance, and perfect for meditation!